Fall Guys is taking the online streaming world by storm with its colorful and playful twist on the battle royale formula that pits 59 players in a series of minigames designed to eliminate them over the course of 5 rounds until there’s one ultimate champion. That’s great, but not all of those minigames are created equal. With that said, here is every Fall Guys minigame ranked from worst to best.

Perfect Match is unquestionably the worst minigame in Fall Guys for a number of reasons: It’s too easy, it fails at actually eliminating players, leading to chaotic final rounds where there are too many participants, and most importantly, it’s just not fun. 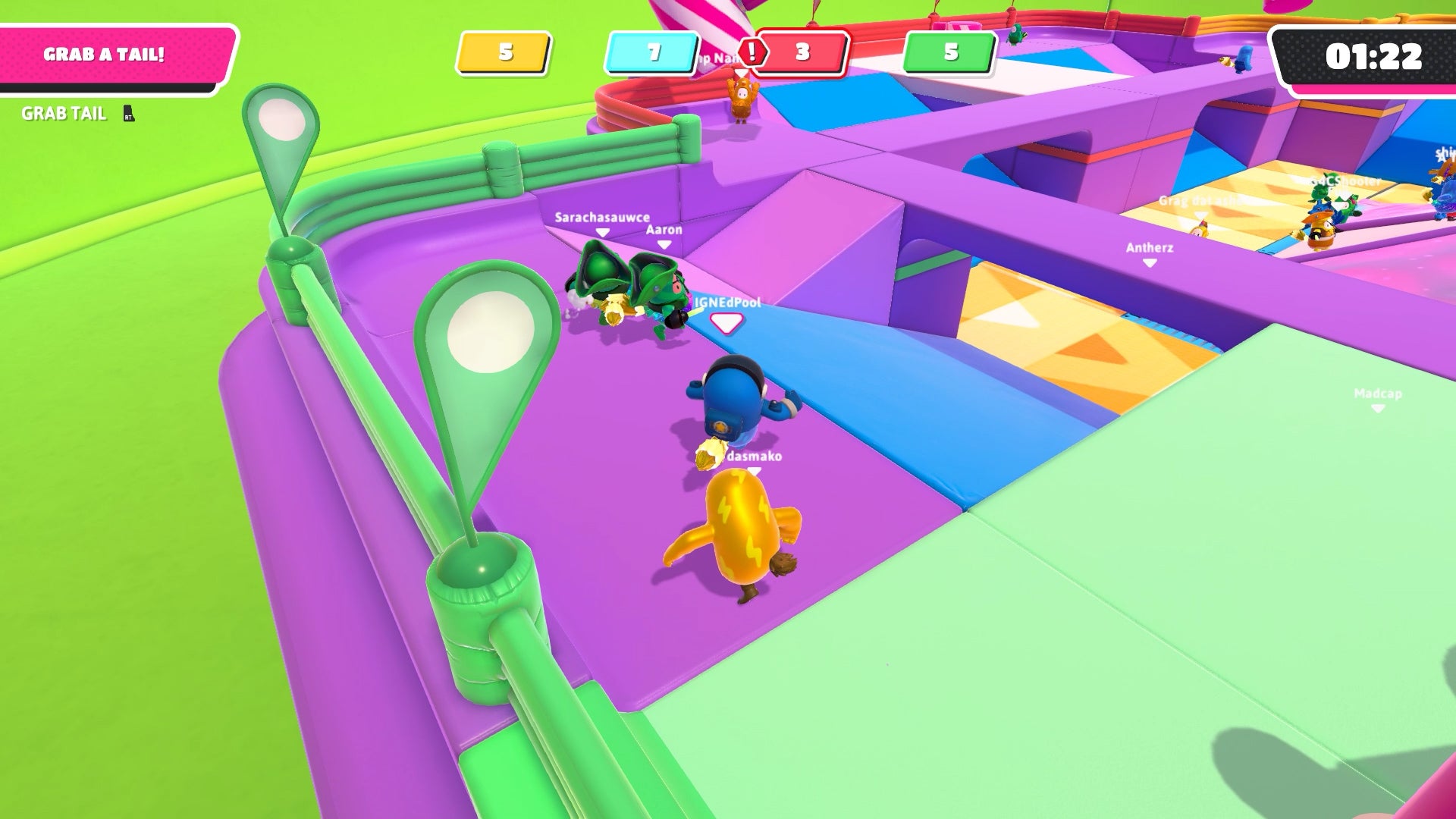 The big problem with all of the tag games in Fall Guys is that the tail grab mechanic is super finicky. Sometimes it feels like you should’ve grabbed someone but you didn’t, other times it feels like you got grabbed from 5 feet away. Team Tail Tag is the worst though because it’s a team game where it can feel like you did everything perfectly, held on to your tail the whole time, and yet you still lose. That just feels bad, man. 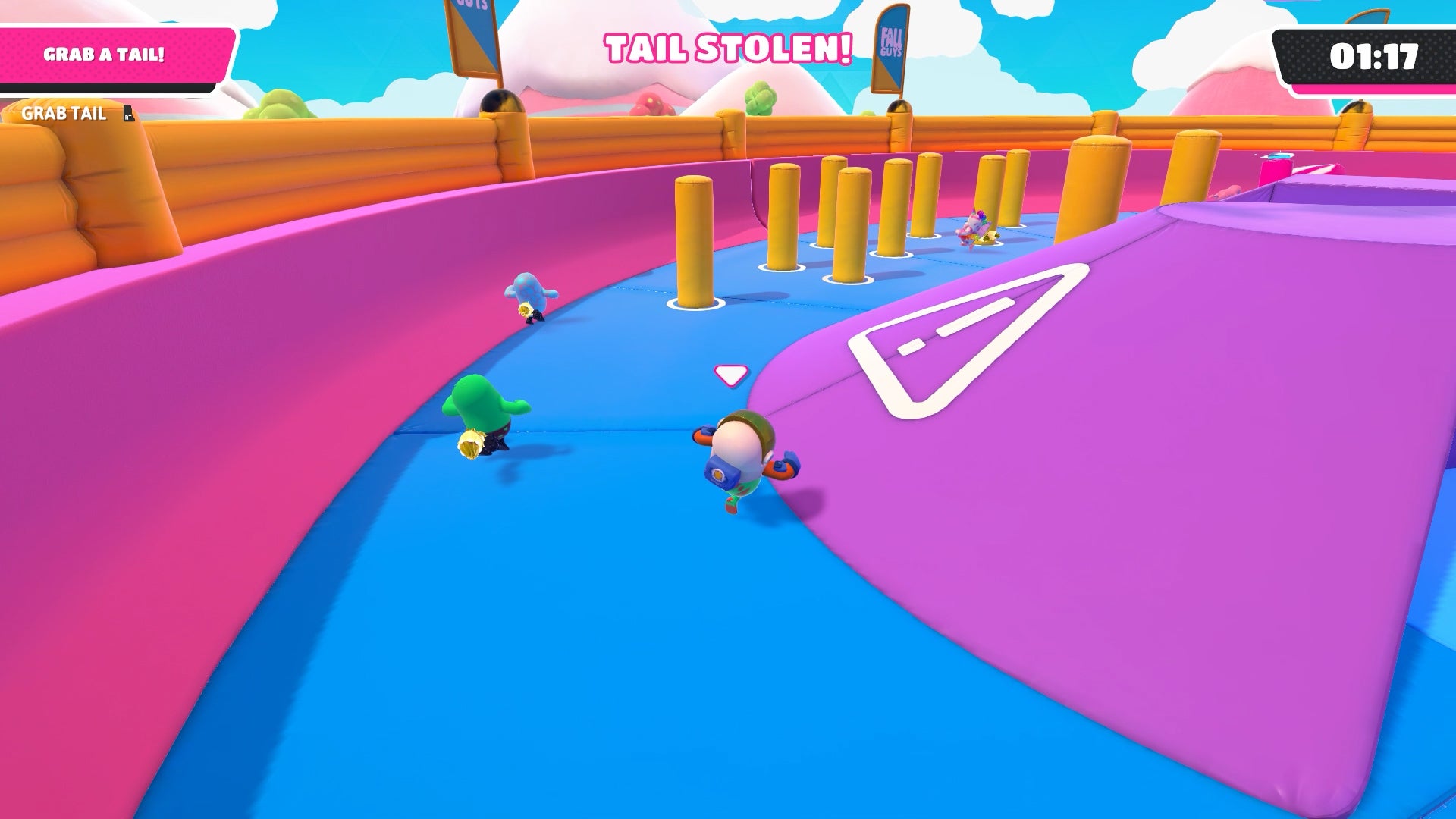 Free for all Tail Tag fares a little bit better because at least you don’t have the excuse of blaming it on your team to fall back on if you get eliminated, but the same critiques still apply. This would likely be a fantastic local multiplayer minigame, but once you introduce lag and 10 or 20 other connections into the mix, it becomes more frustrating than it should be. 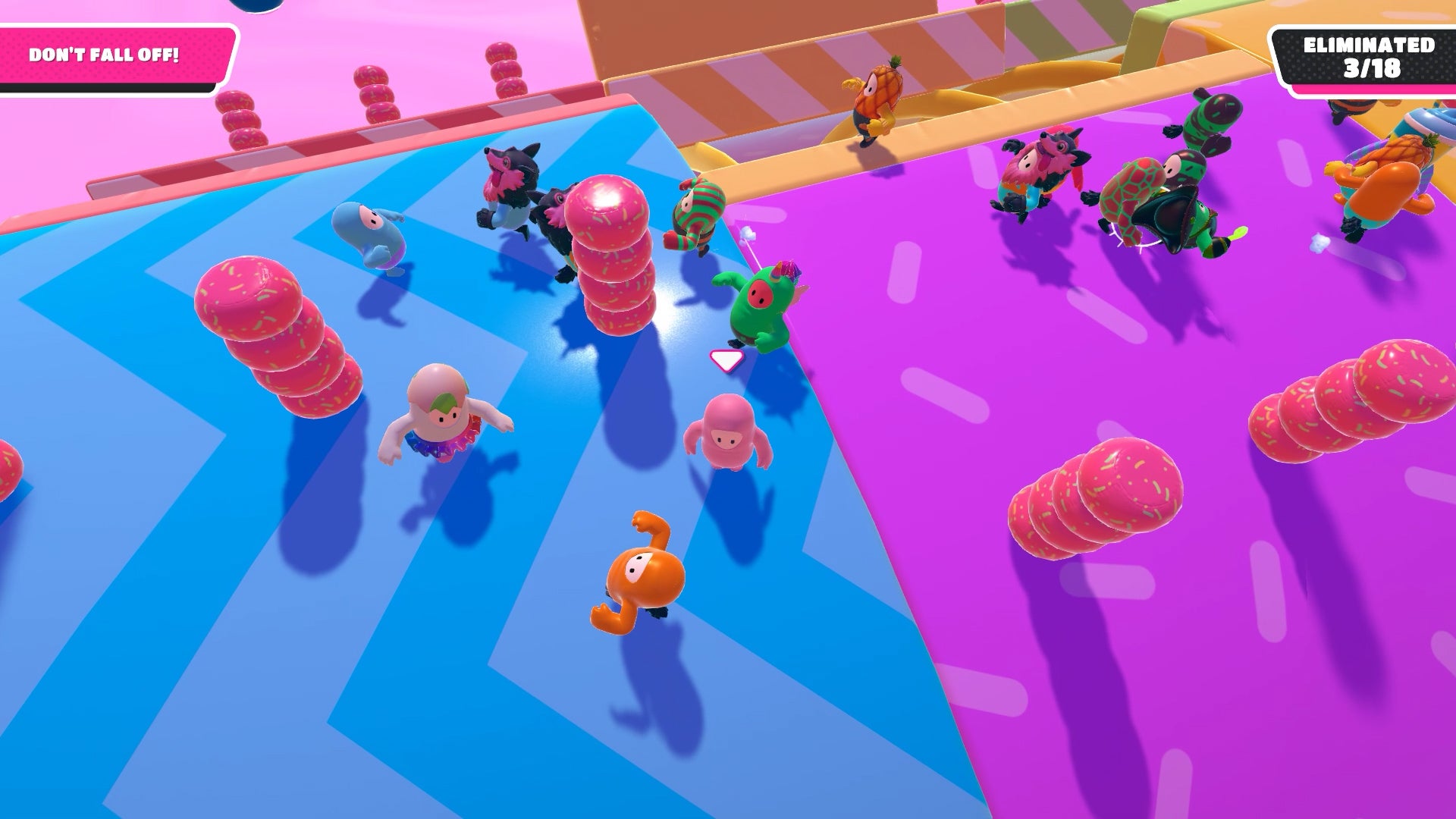 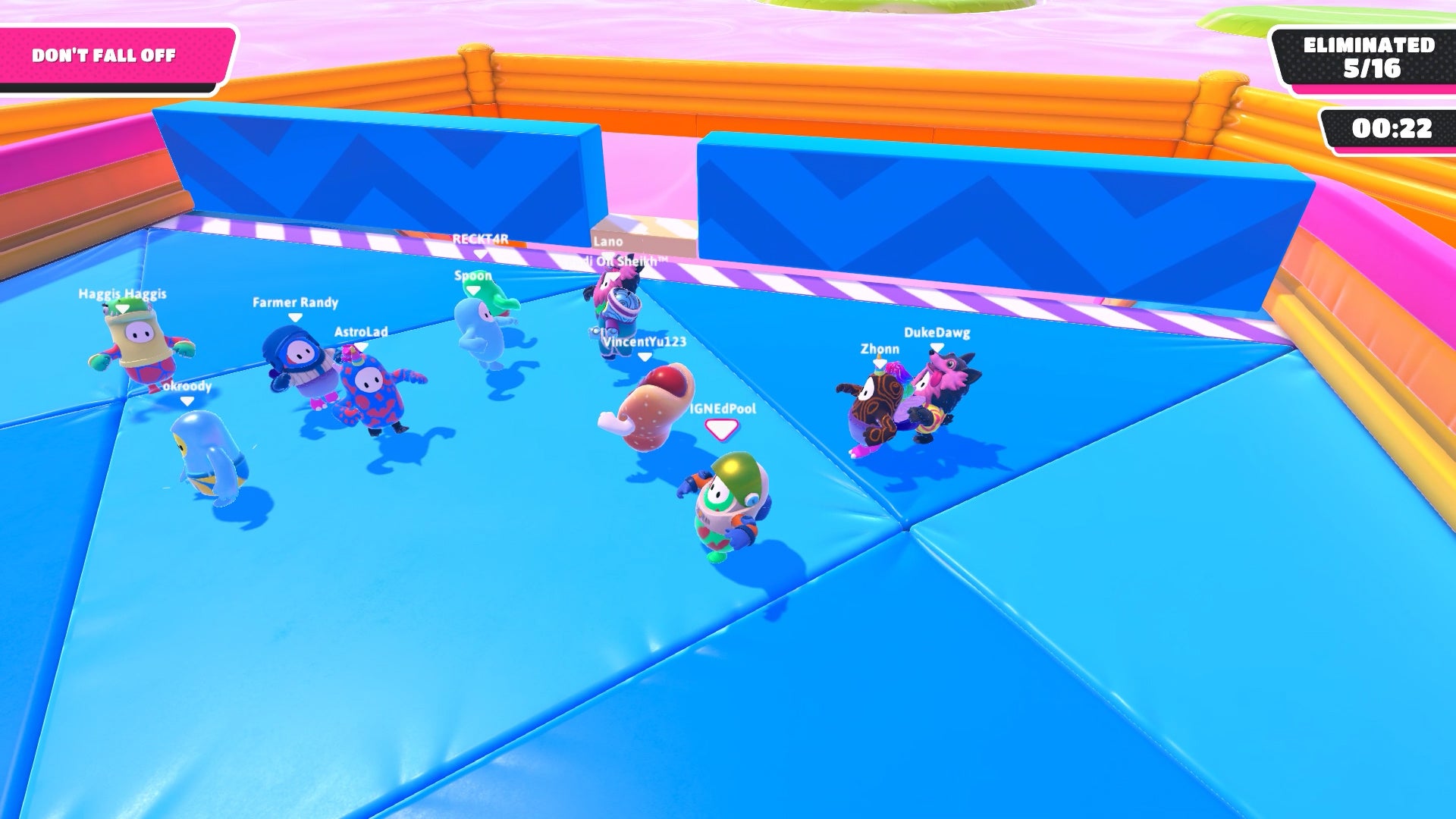 Like Roll Out, there’s also some appeal in Block Party for those who like to watch the world burn. There’s some definite potential for absolute chaos, but more often than not, Block Party is a boring game of moving left and right to get out of the way of easily avoided obstacles. When things go wrong and you get eliminated in Block Party, its usually because of some unavoidable disaster as opposed to anything you did wrong, which never feels great. 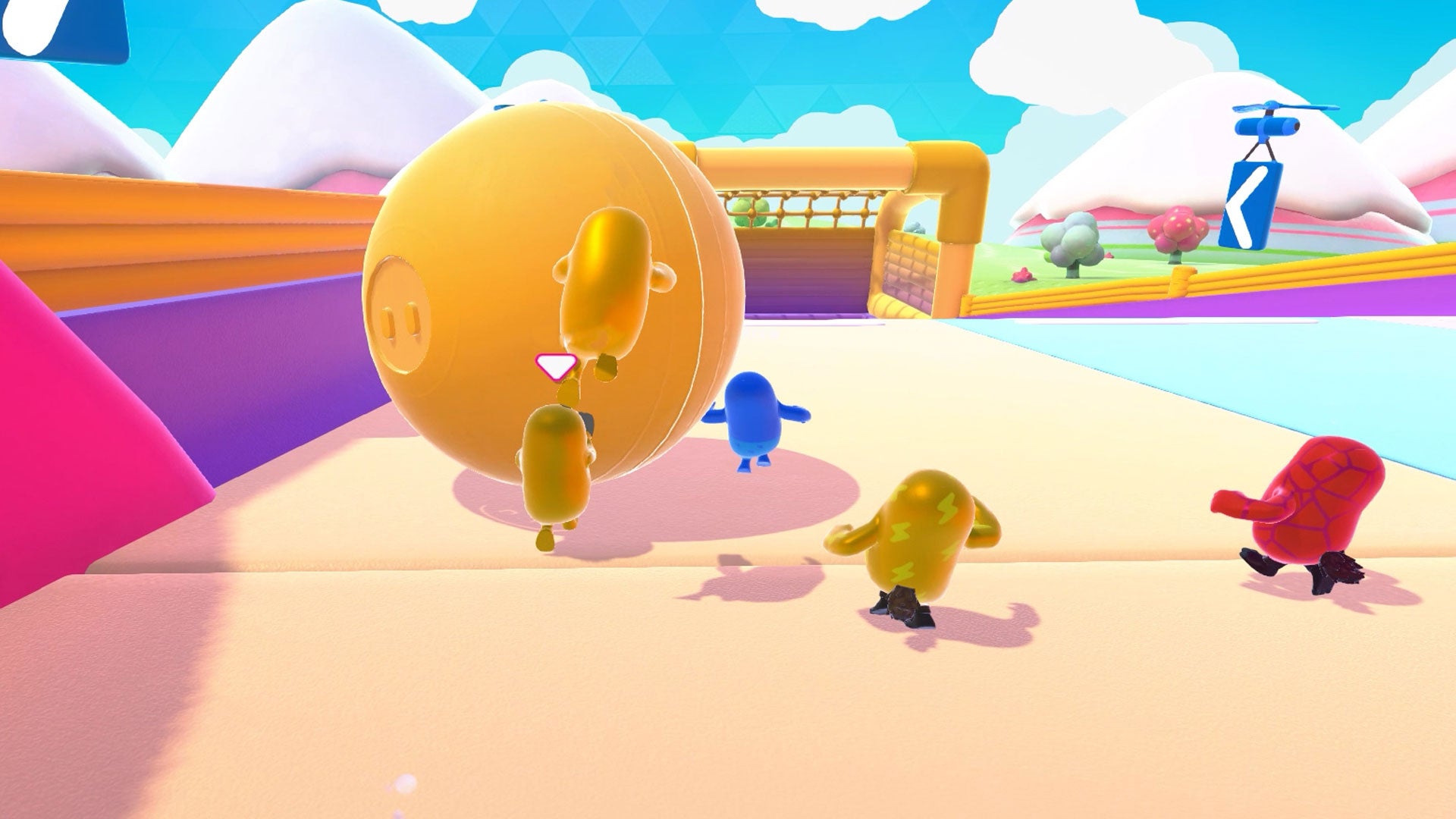 The beginning of Rock ‘n’ Roll is actually pretty fun. Once you get the ball off your solo track and into the open field, this becomes one of the more frustrating minigames as the other teams now must balance pushing their own ball towards the goal with blocking the other team’s. There’s no real good way to break free from a team that’s devoted to stopping your ball, which leads to a minigame that lasts way longer than it should. 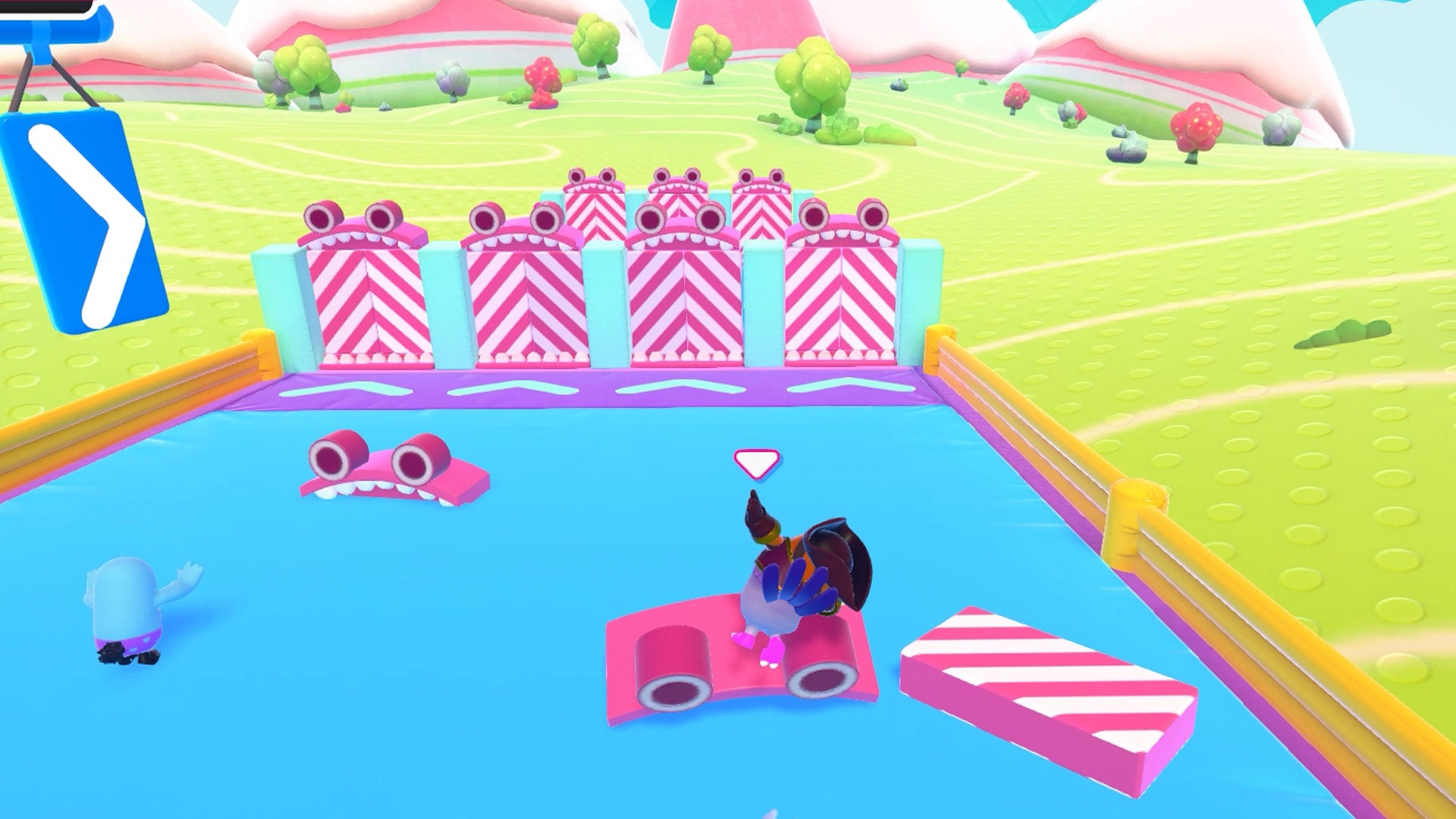 Door Dash is pure unadulterated chaos, and that can be fun in its own way for sure. But it’s also one of the most luck oriented minigames in all of Fall Guys. Pick the right door and you completely bypass the hoard of bodies that pile up as everyone tries to squeeze through at once. Pick the wrong door and become one of those bodies. 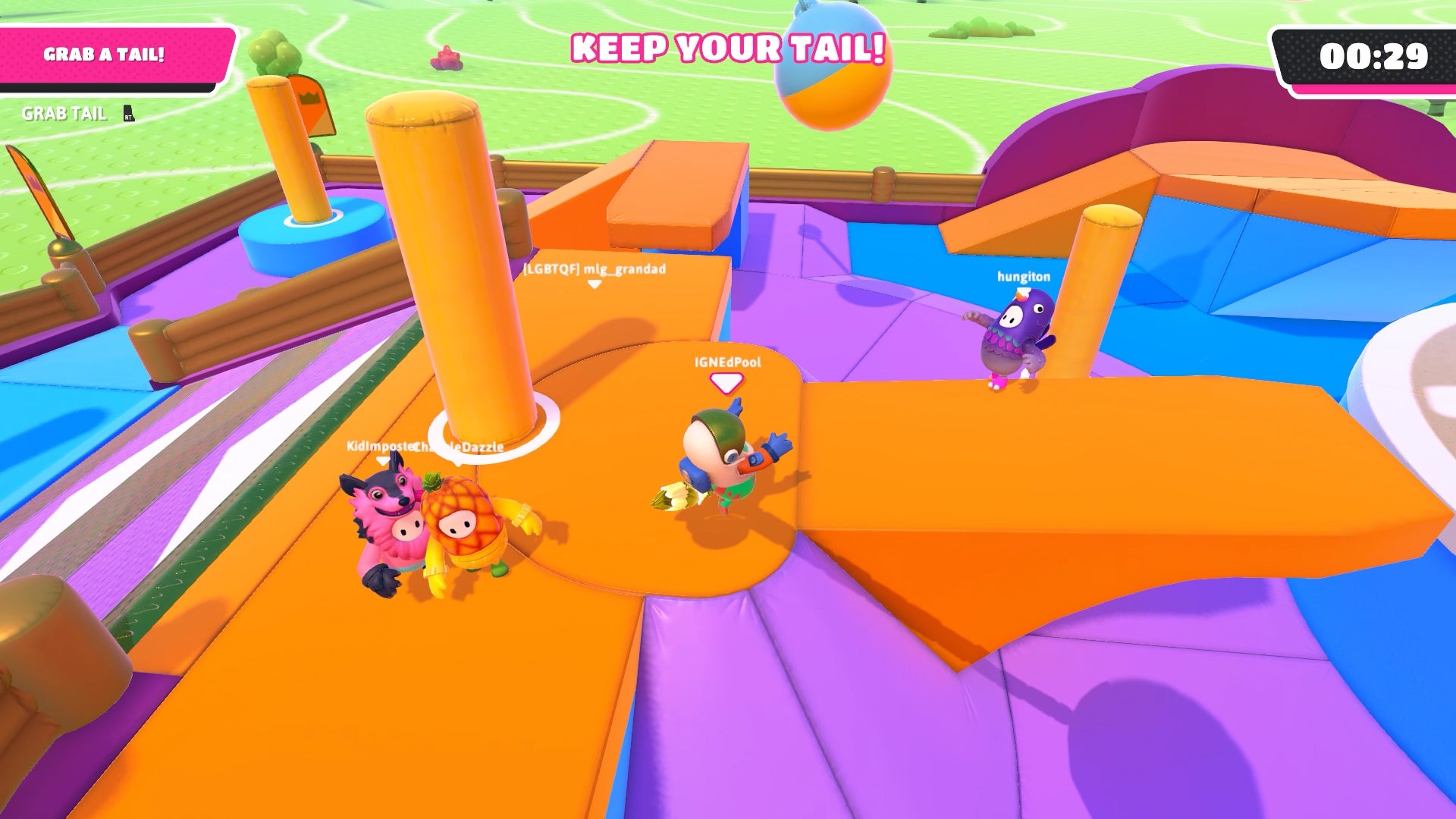 While it’s still a tail tag game and suffers from the same problems as Team Tail Tag and Free-For-All Tail Tag, the Royal Fumble variation earns some points for the sheer franticness involved with there only being one tail in play. There’s a certain level of satisfaction you get when you’re in control of the tail and are able to feel like you managed to juke one pursuer and out play another. It’s the worst of the final rounds, but certainly not bad. 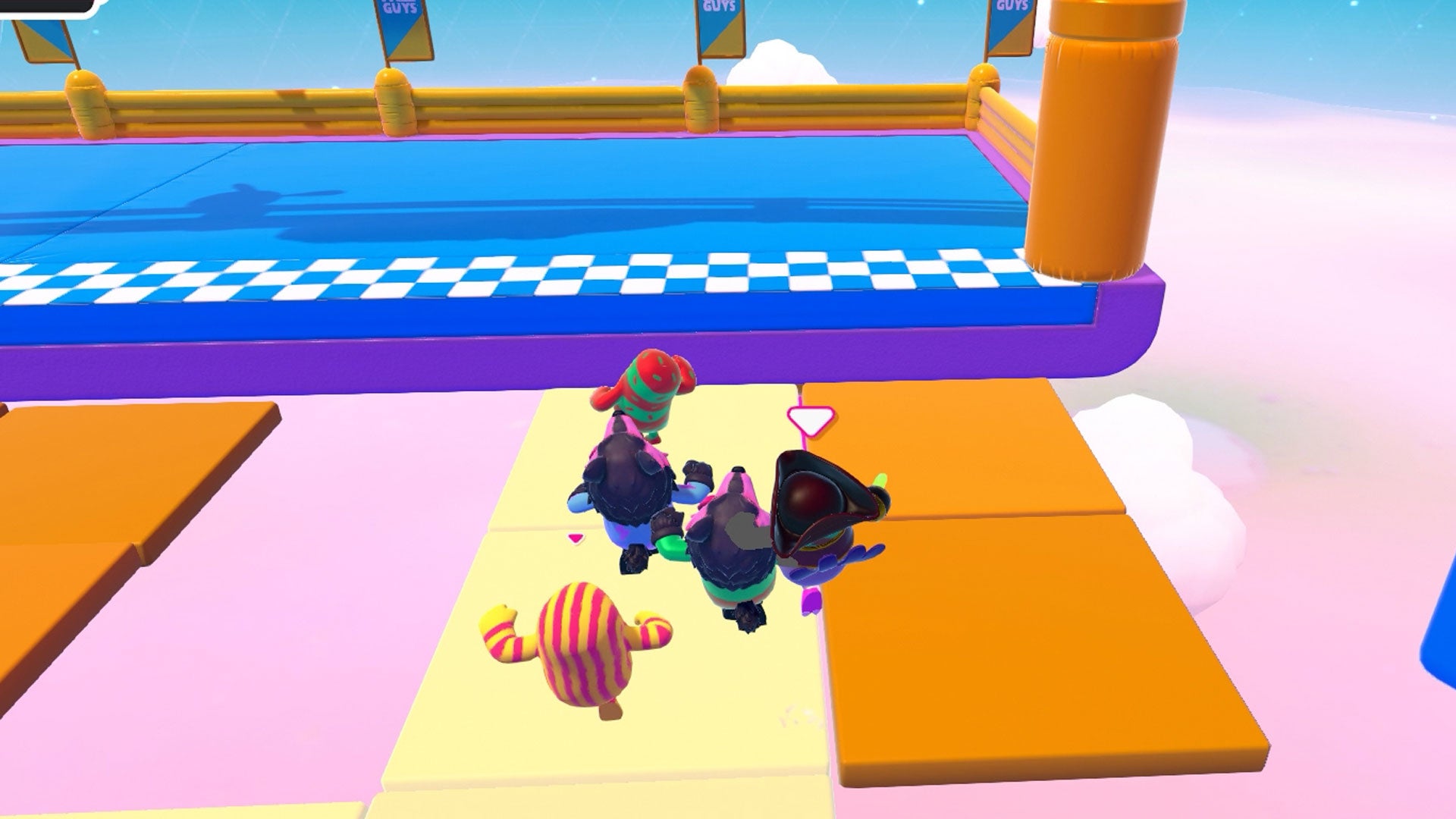 The rush of adrenaline you get in Tip Toe when the way to the end is finally clear and everyone makes a mad dash to try and qualify is one of my favorite micro-moments in all of Fall Guys. But everything leading up to that moment… It can be slightly maddening to say the least. This is one of those games where you will curse the name of a jellybean shaped man or woman you’ve never met when they suddenly bump you off the narrow walkway and send you all the way back to the start. 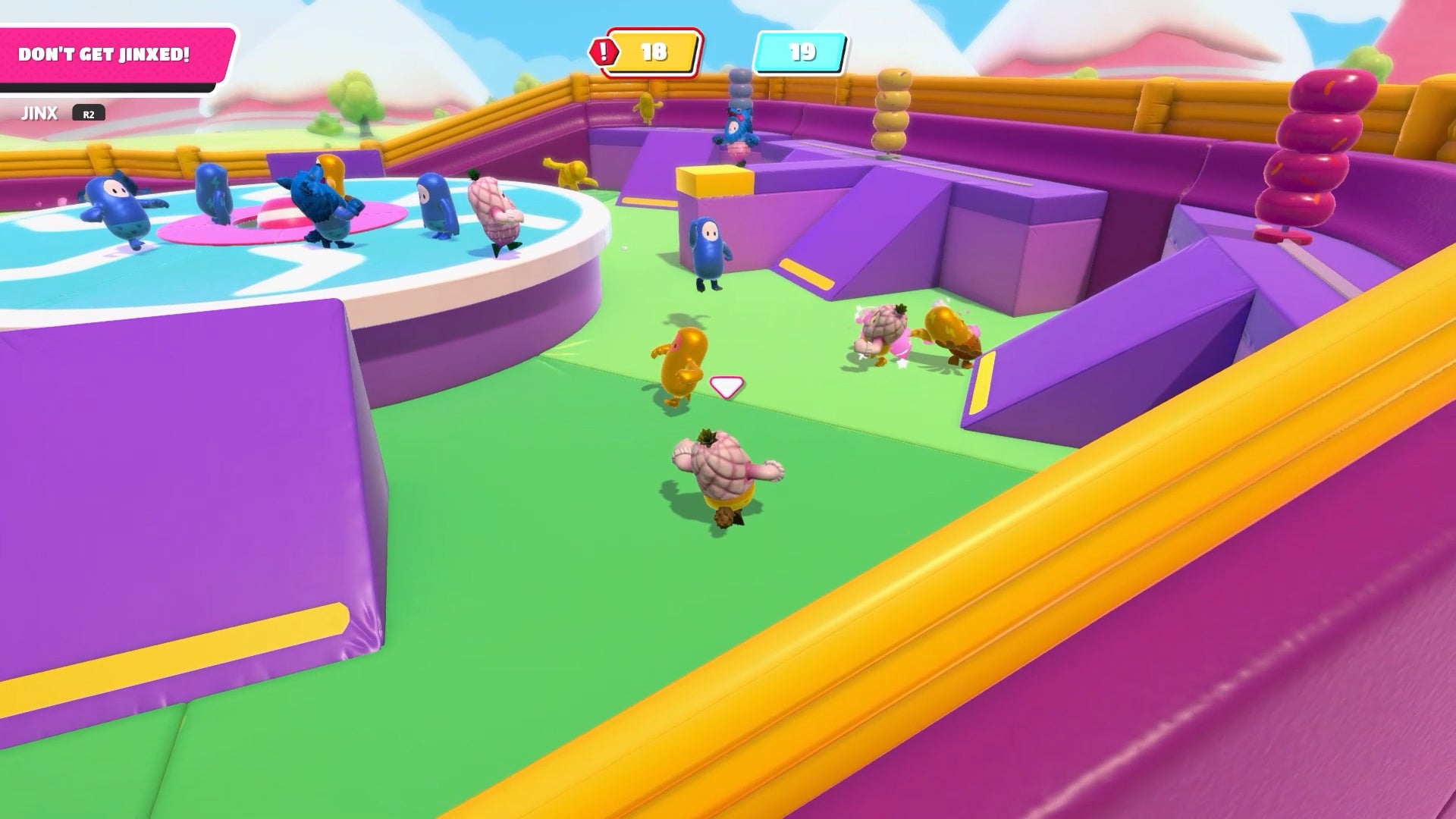 Jinxed is another tag-style game, and while it’s got many of the same issues, it’s also got a much better map that gives players the ability to hide and use the environment to escape pursuit in a much more satisfying way. Plus, there’s a better sense of being a contributing member to your team since you’re actively reducing the remaining lives of the other teams. Most importantly though, it makes me feel like a kid playing zombie tag again. 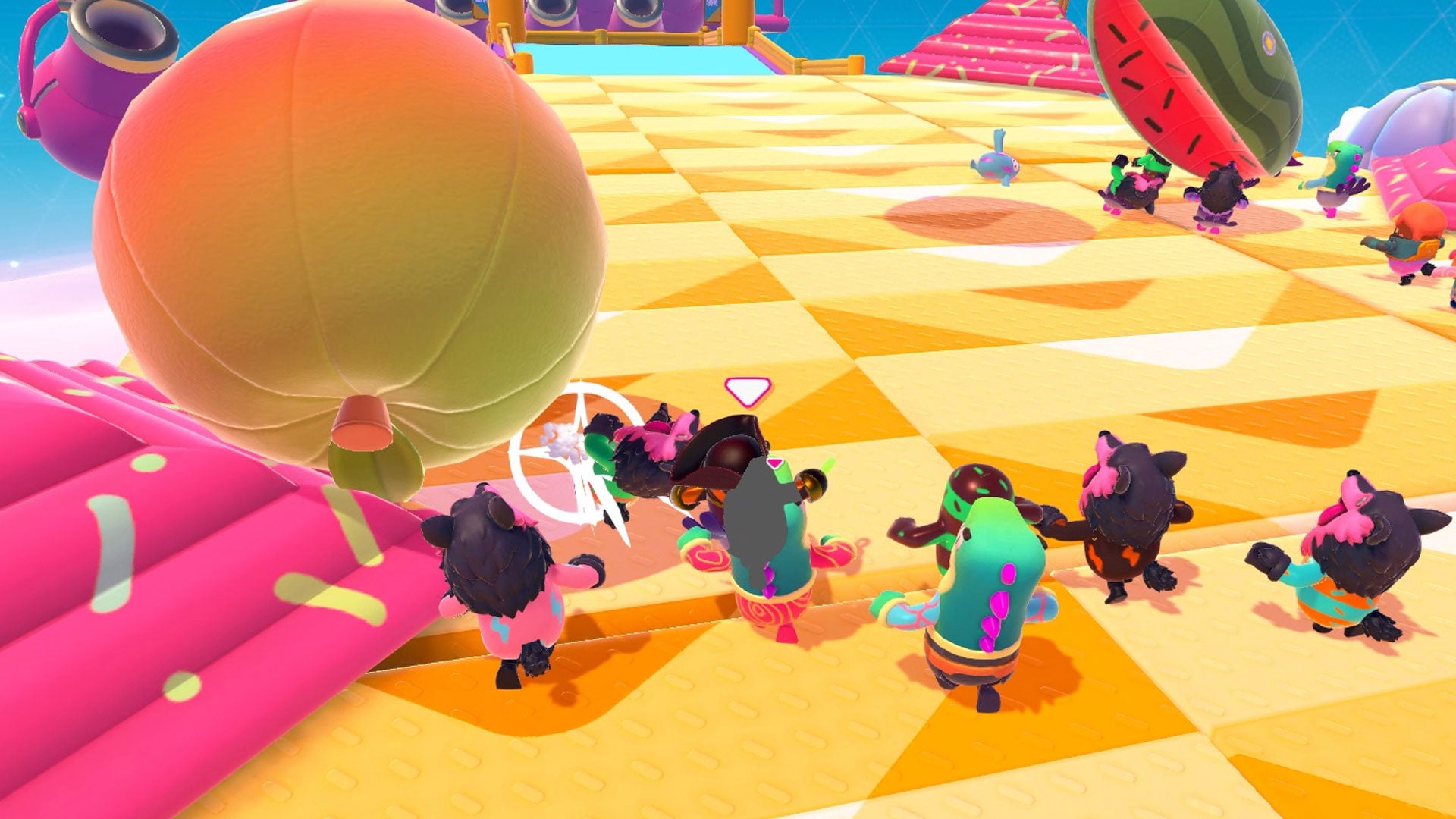 Fruit Chute is another minigame that can quickly become pure chaos, but at least it feels like slightly controllable chaos. A careful eye on the horizon allows you at least see where the fruits are coming from and allow to at least try to get out of the way of the erratic bounces that are soon to follow. It’s not one of the best races, but given that the race minigames are the best parts of Fall Guys, Fruit Chute is still pretty great. 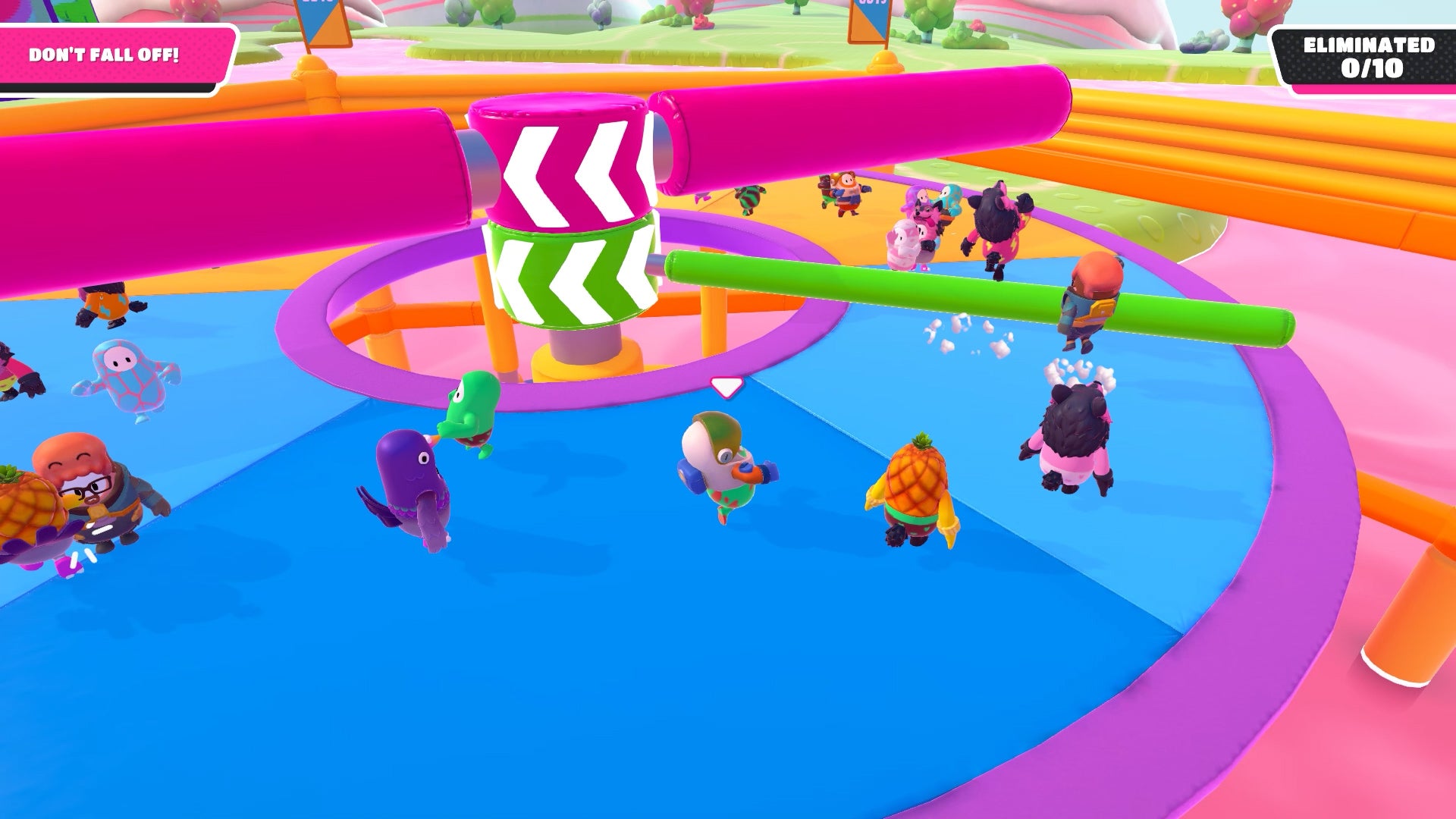 Jump Club feels like a game straight out of Mario Party, and that’s a good thing, because Jump Club captures that deceptively simple feeling of a Mario Party game perfectly. The challenge isn’t in jumping over the bar, it’s in being able to judge when the low bar is going to be clear of the high bar and being able to move to a spot where you’re able to get a clear jump, which makes this minigame more of a challenge of the mind than anything else. 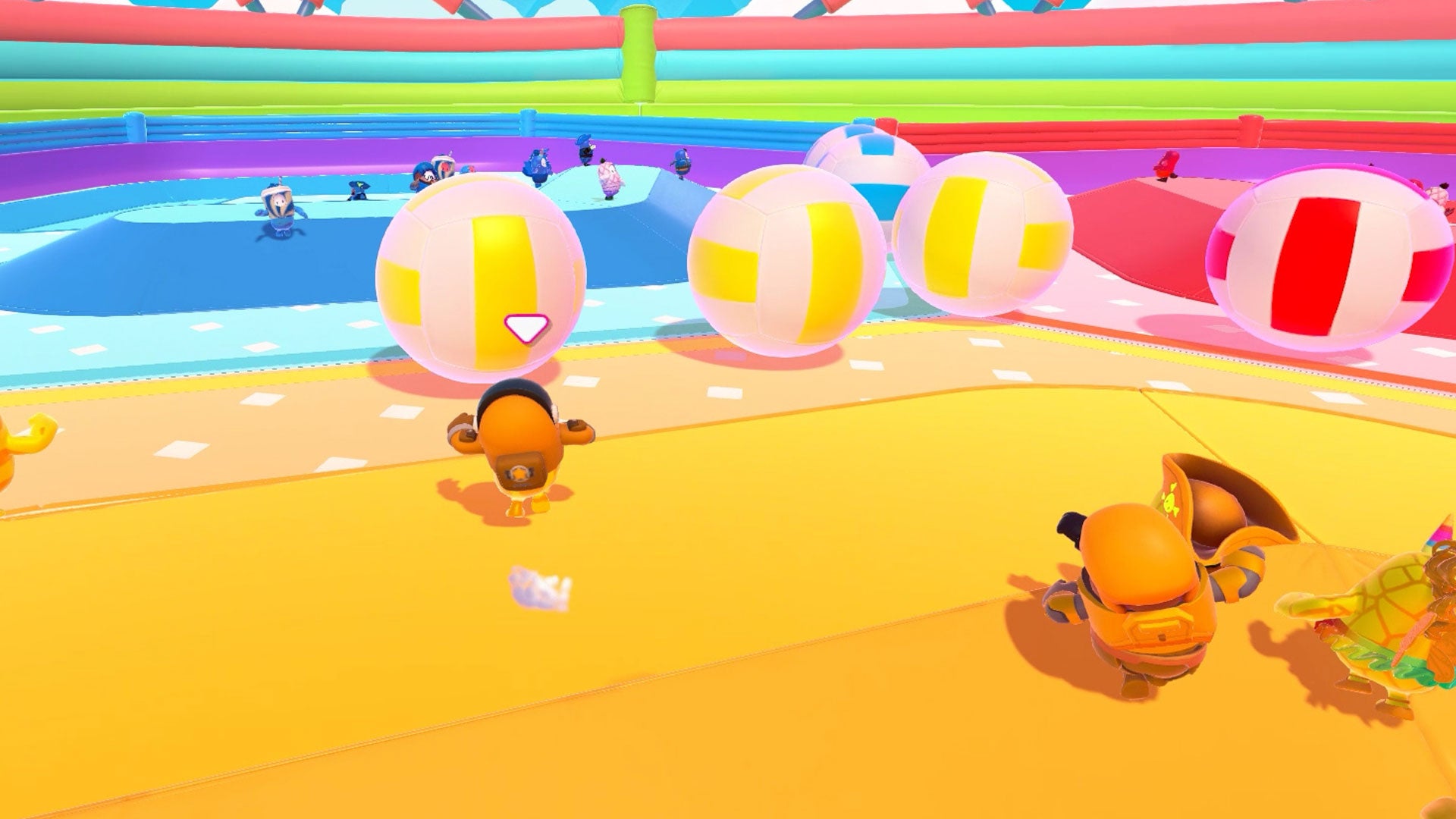 What’s great about Hoarders is that it always feels like you’re still in the game, regardless of how far behind you are, and on the other end of that, even if you’re far in the lead, there’s always the possibility that two of your balls will roll over to another team’s side and put your team on the chopping block for elimination. It also is a game where you can feel like you made a difference, whether by stopping a ball from getting out of your territory, or stealing one of your opponent’s. 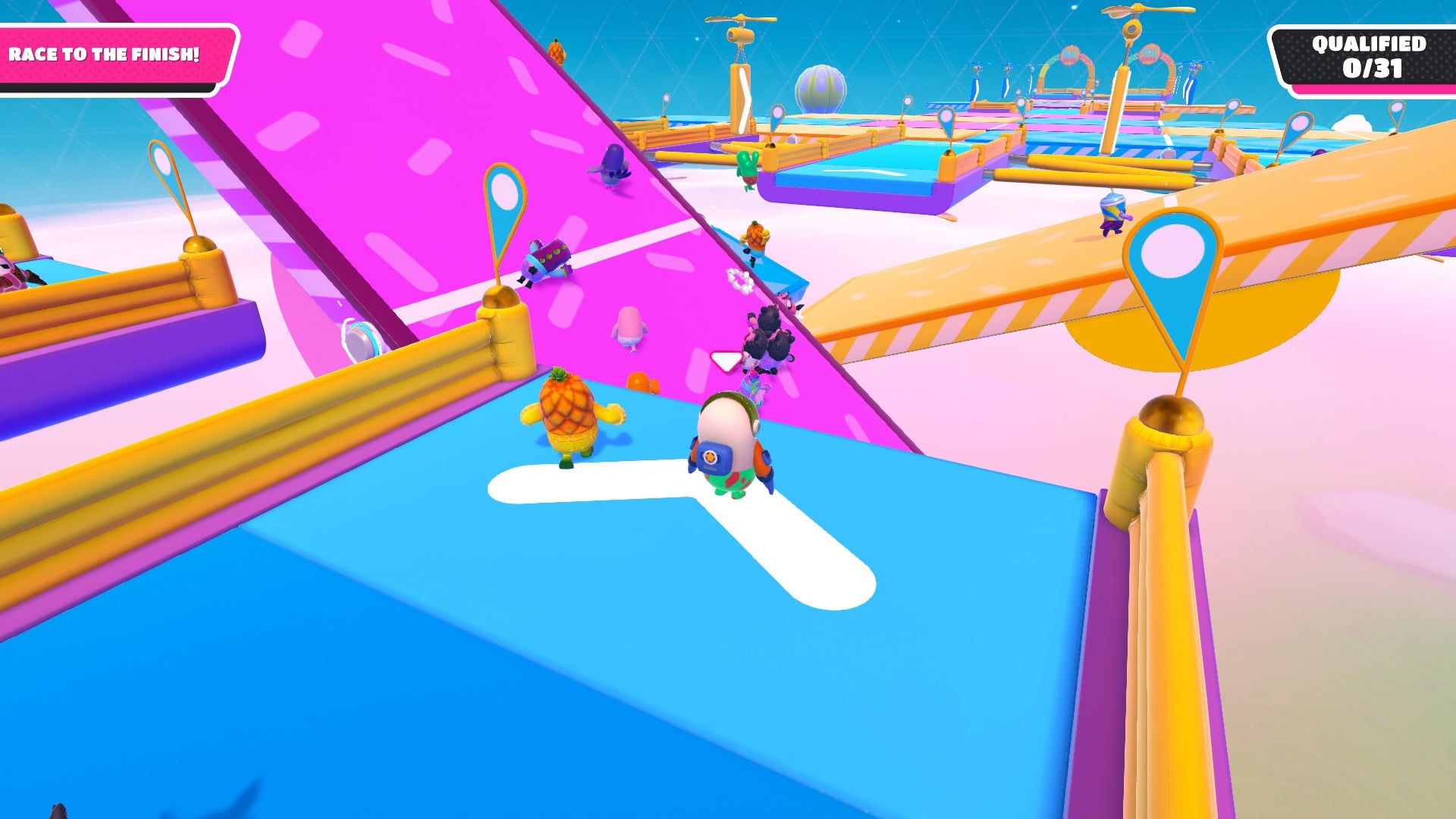 See Saw is likely a common source of rage for a lot of people just starting out in Fall Guys, but it’s also one of the best at teaching Fall Guys’ most important lesson: Patience. Once you get a feel for when to jump, when to wait, and when to entirely give up and try and take a different path, See Saw becomes a lot of fun and one of the most skill dependent minigames in all of Fall Guys. 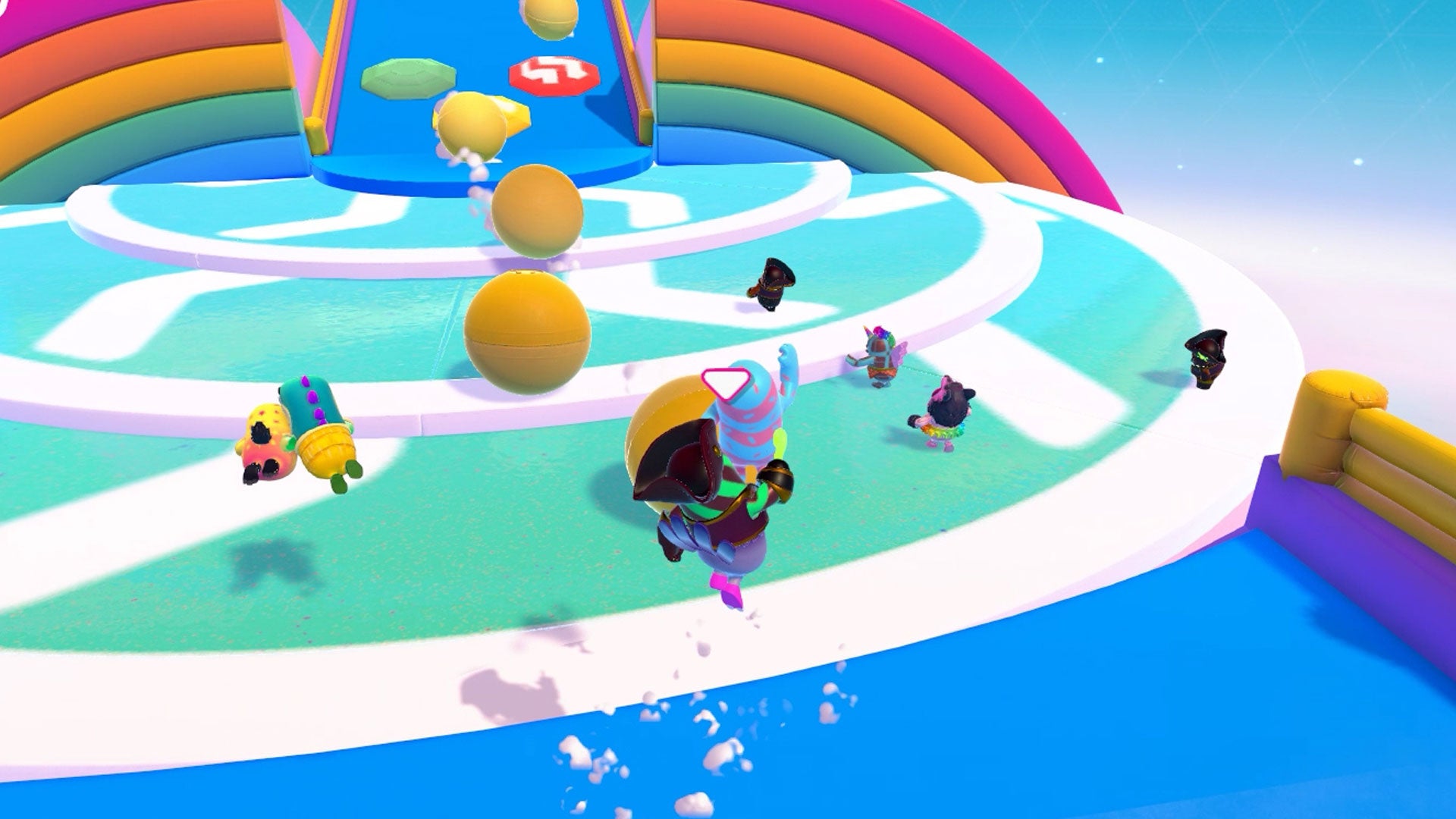 Dizzy Heights is one of the more simple races out there: You’ve got a bunch of rotating plates that spin you right round baby right round, and you just gotta make your way through them to get to the exit. But as often is the case with Fall Guys, sometimes simpler is better. 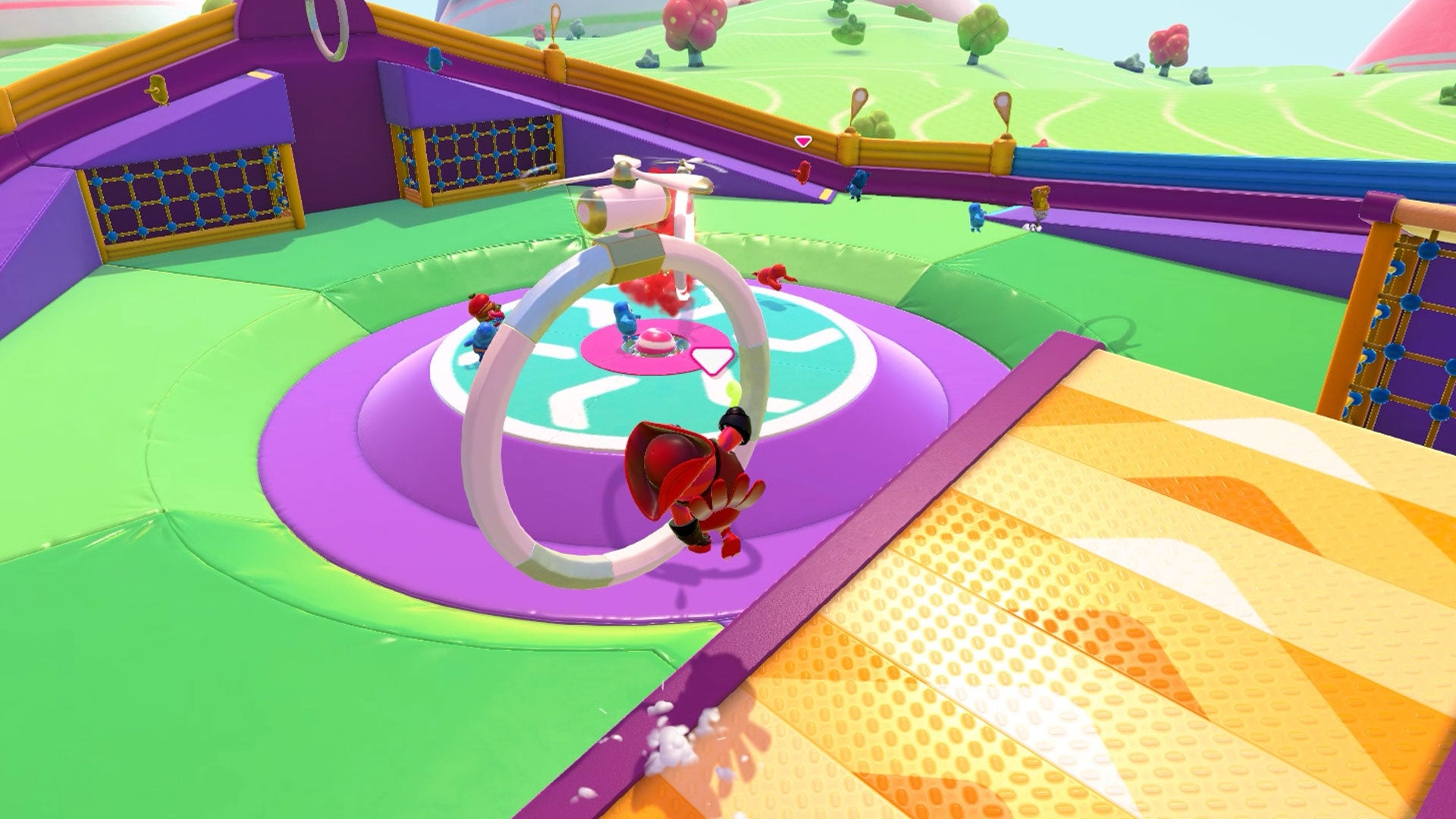 The best team games in Fall Guys are the ones where it feels like you truly made a difference on your team, and Hoopsie Daisy is one of the best at instilling that feeling. Sure, there’s all kind of luck involved with regards to where the hoops spawn in relation to your own position, but Hoopsie Daisy is still frantic fun. 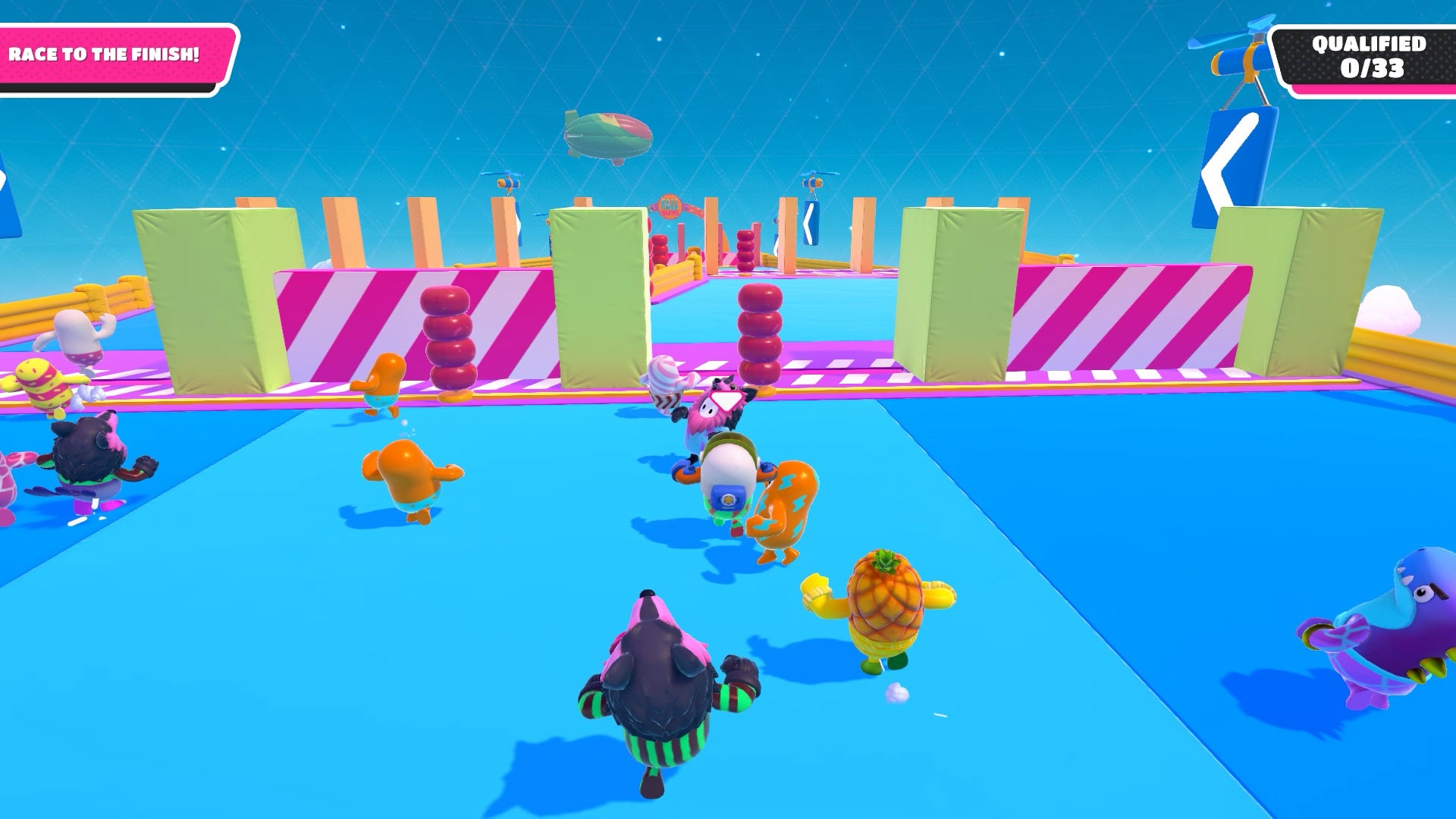 While it’s a little confusing that the minigame about crashing through barriers has dash in the title and the one about dashing through them has crash in the title, Gate Crash is nonetheless the superior cousin to Door Dash. This one’s all about experience, and once you get a feel for when the gates are going to open and whether you’ll be there in time for it, this race becomes one of the best ones. 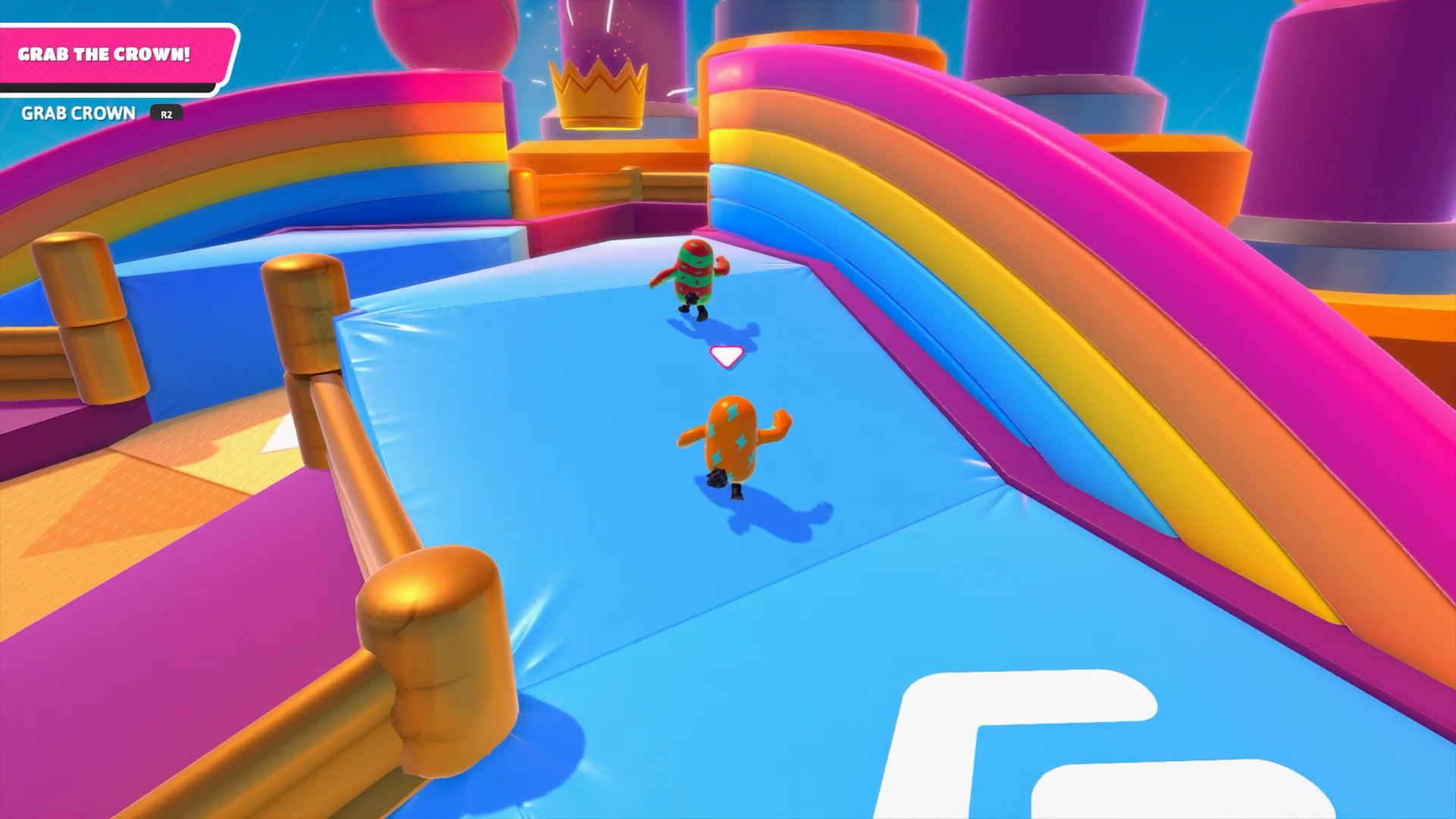 Fall Mountain has this aura of being the AgroCrag of Fall Guys. It’s a final race to the top where only one person can win and just about every obstacle is thrown your way. In that way, it’s a ton of fun, but also it can feel a little too up to chance when it comes to your placement on the starting line and the unpredictable bounces of the boulders. Still, it’s a worthy final game. Just make sure to hold the grab button to actually grab the crown at the end. 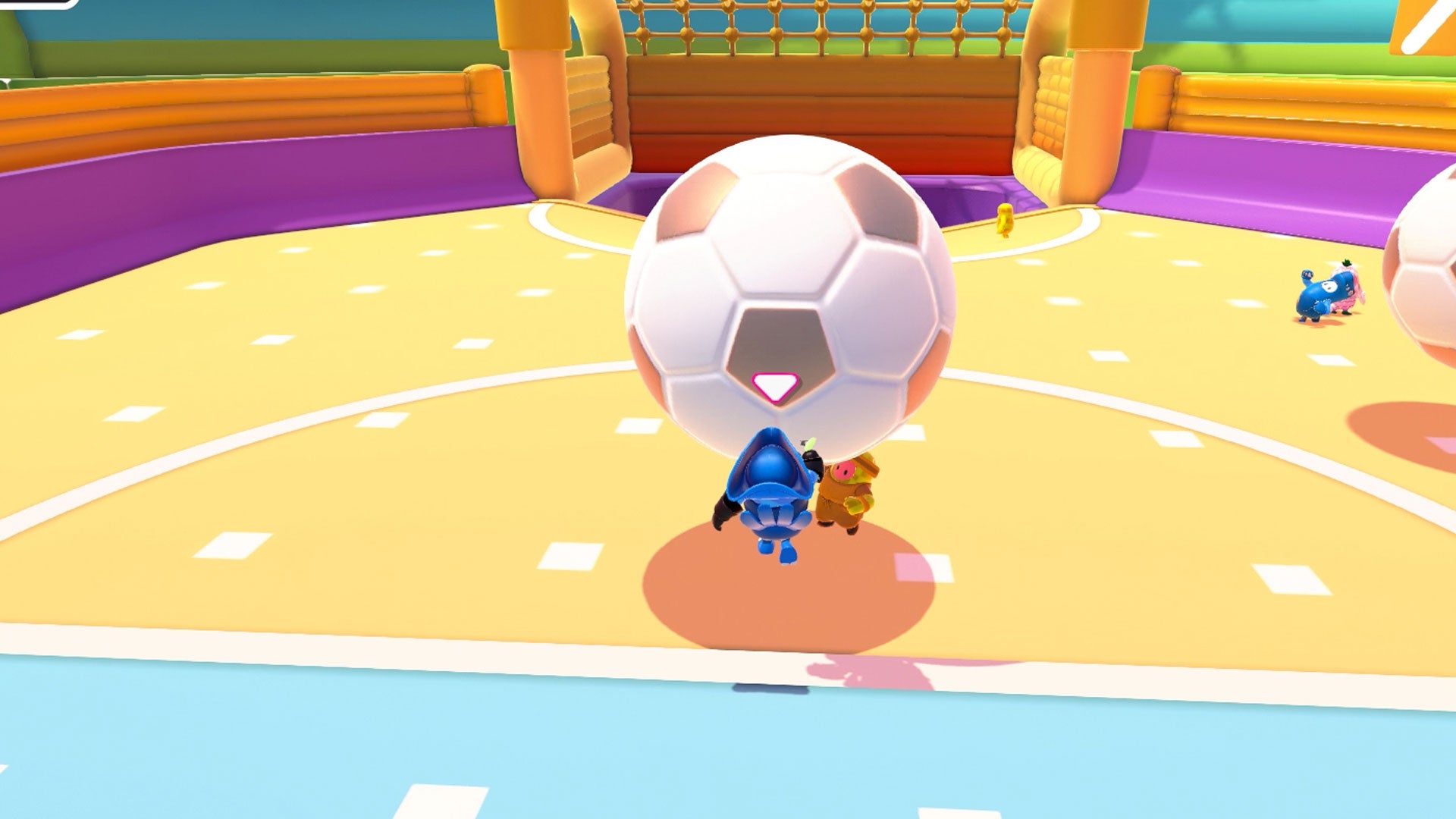 The only thing that’s really keeping Fall Ball from being higher on this list is the fact that if your team is just getting absolutely trounced in the first minute, it can feel hopeless in a way that’s just downright depressing. Still though, Fall Ball is one of the more skill heavy games in Fall Guys, and while that isn’t to say that it’s Rocket League level, at least theres room for skilled players to fill in the gaps on their team and play where they’re needed. Whether that’s falling back as a goalie, playing the midfield to hit new balls as they drop, or being aggressive and putting pressure on the other team. 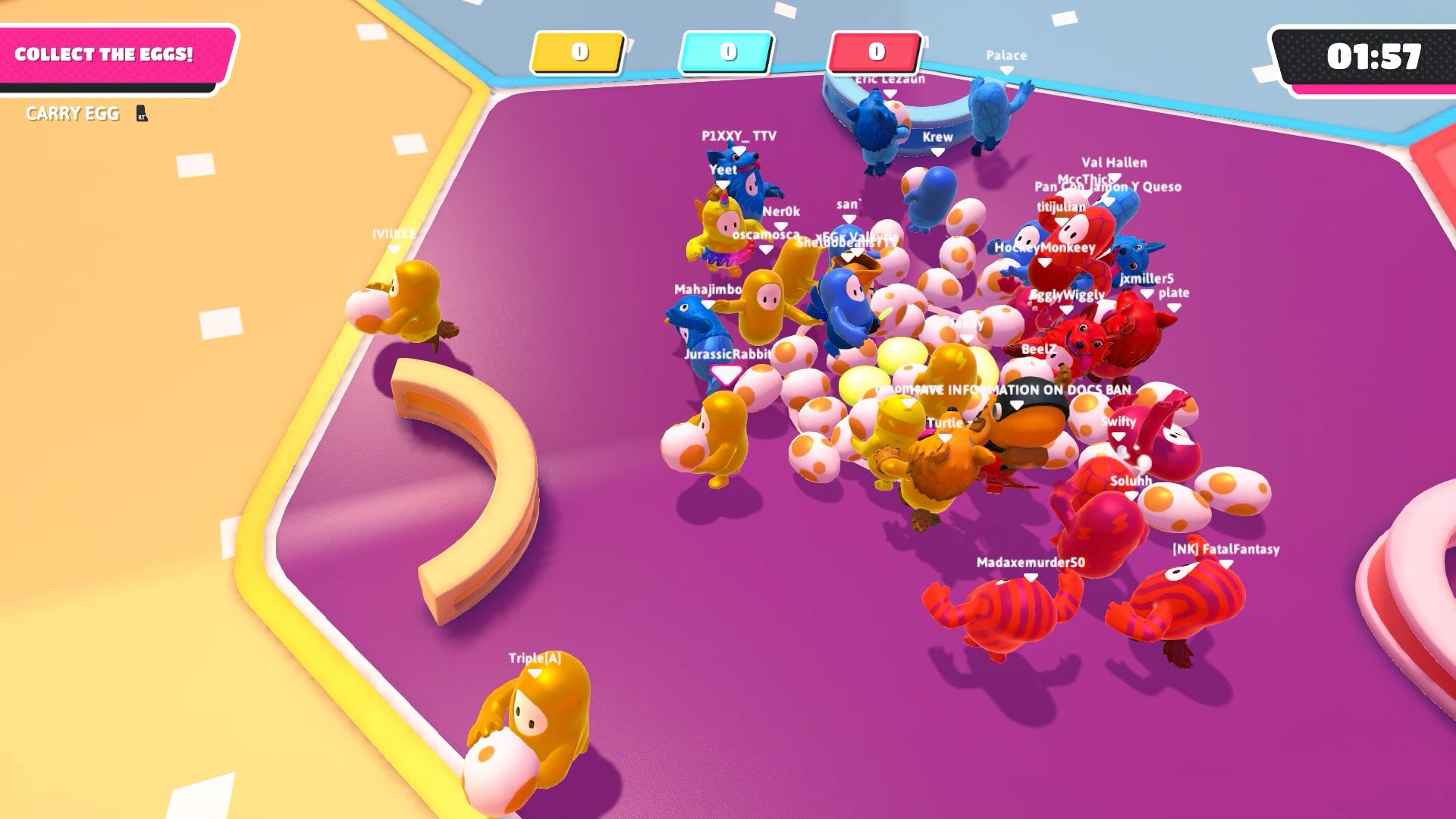 Egg Scramble is one of the most dynamic minigames in Fall Guys, which is also what makes it one of the best. Depending on how the score looks, your own role could shift to one of defense where you try and secure your lead by preventing people from stealing eggs from your zone, to jumping down into the pit of the winning team and trying to steal one of their high value golden eggs, to trying to scrounge up whatever free eggs still remain on the field. Either way, it’s appropriately a mad scramble and our favorite team game of the bunch. 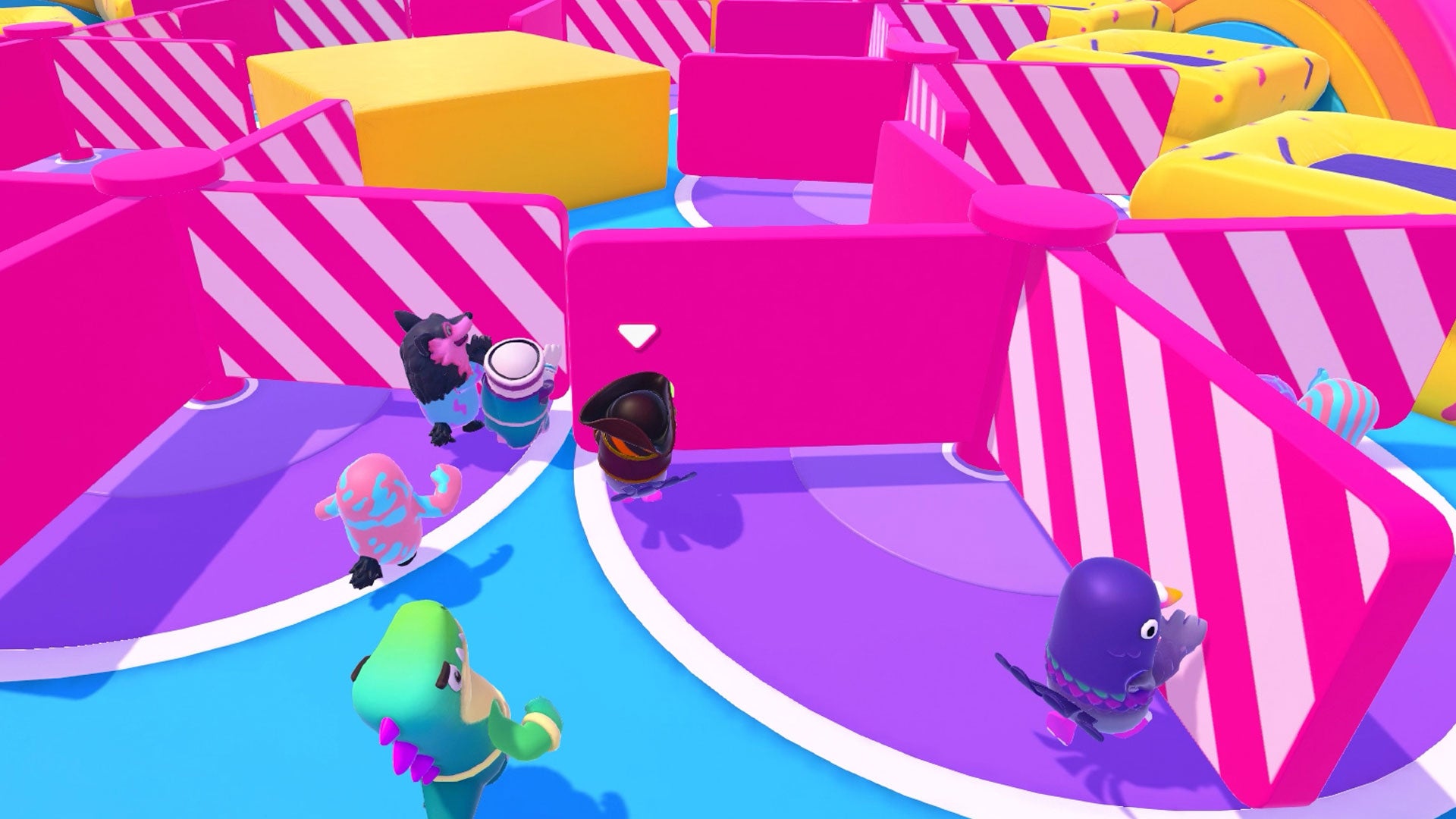 Hit Parade is great because of the variety of obstacles throughout the race. While most races are defined by a single specific theme, Hit Parade just throws everything at you. It starts with a balance beam, then there’s a race to get through a bunch of turntables, then everyone’s gotta clump up and try to squeeze through this small opening, which leads to the main event, the pendulum bridge. After that it’s just a quick dash up a slicked up slope to the end. There’s just a lot going on in Hit Parade, and all of it is a great time. 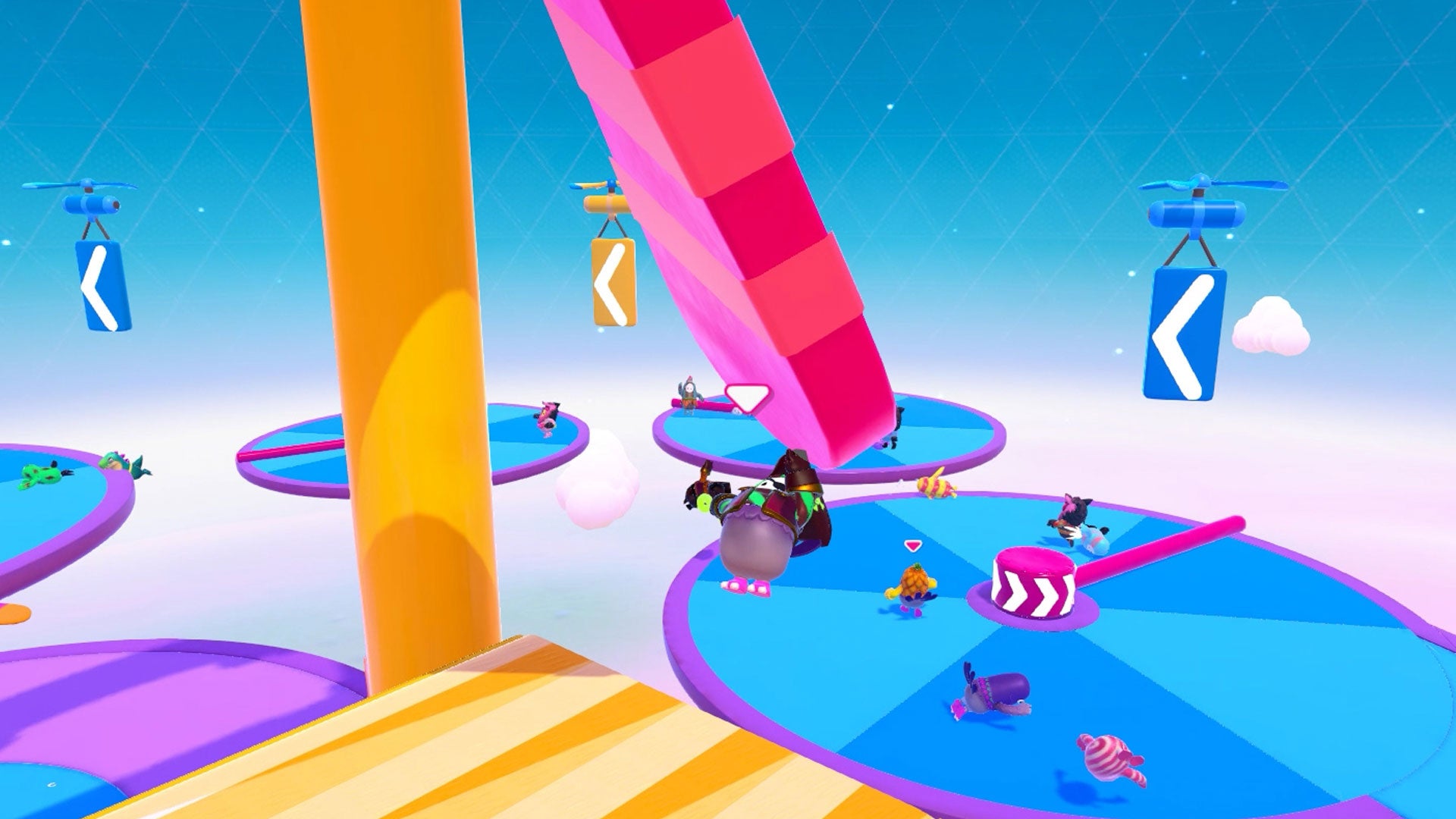 Whirlygig is a race all about fans and rotating bars of death that will send you careening off into the abyss if your jumps aren’t on point, and while that’s great on its own, there are other small bits to the level that help elevate it to the top three of this list, namely the final decision of whether you decide to take the middle launch ramp of either death or salvation, or you play it safe and take the longer paths on the right or left. 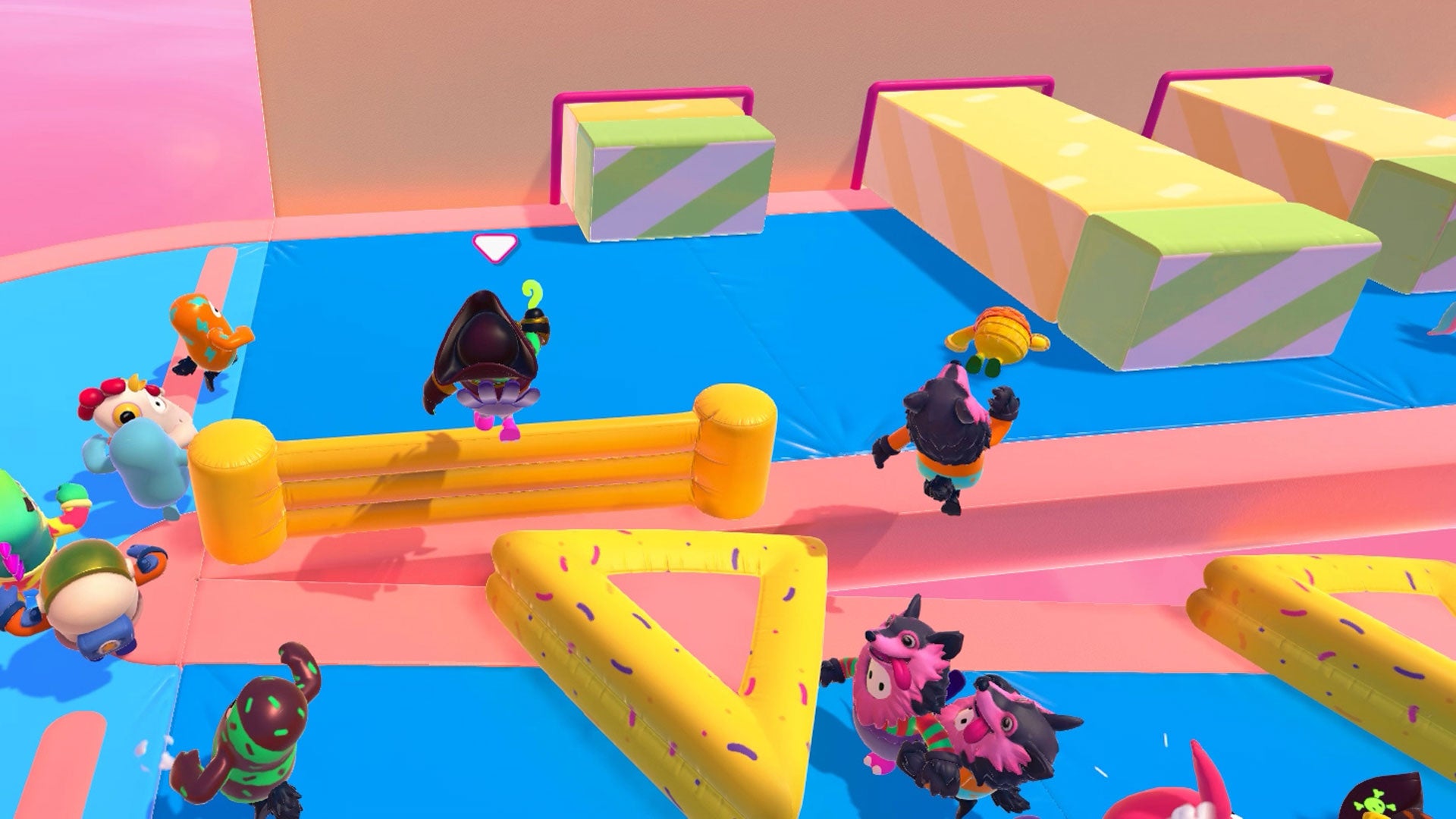 The Slime Climb is a unique race in that you don’t actually have to beat any of your competitors in order to qualify. You just have to beat the course without falling in the rapidly rising lava, which makes it possibly the only 100% purely skill based mini game. The course itself also benefits from hitting a sweet spot of being just easy enough to be reliably conquered by experienced players, but also hard enough to the point where there’s almost always a good amount of people eliminated for the next round. 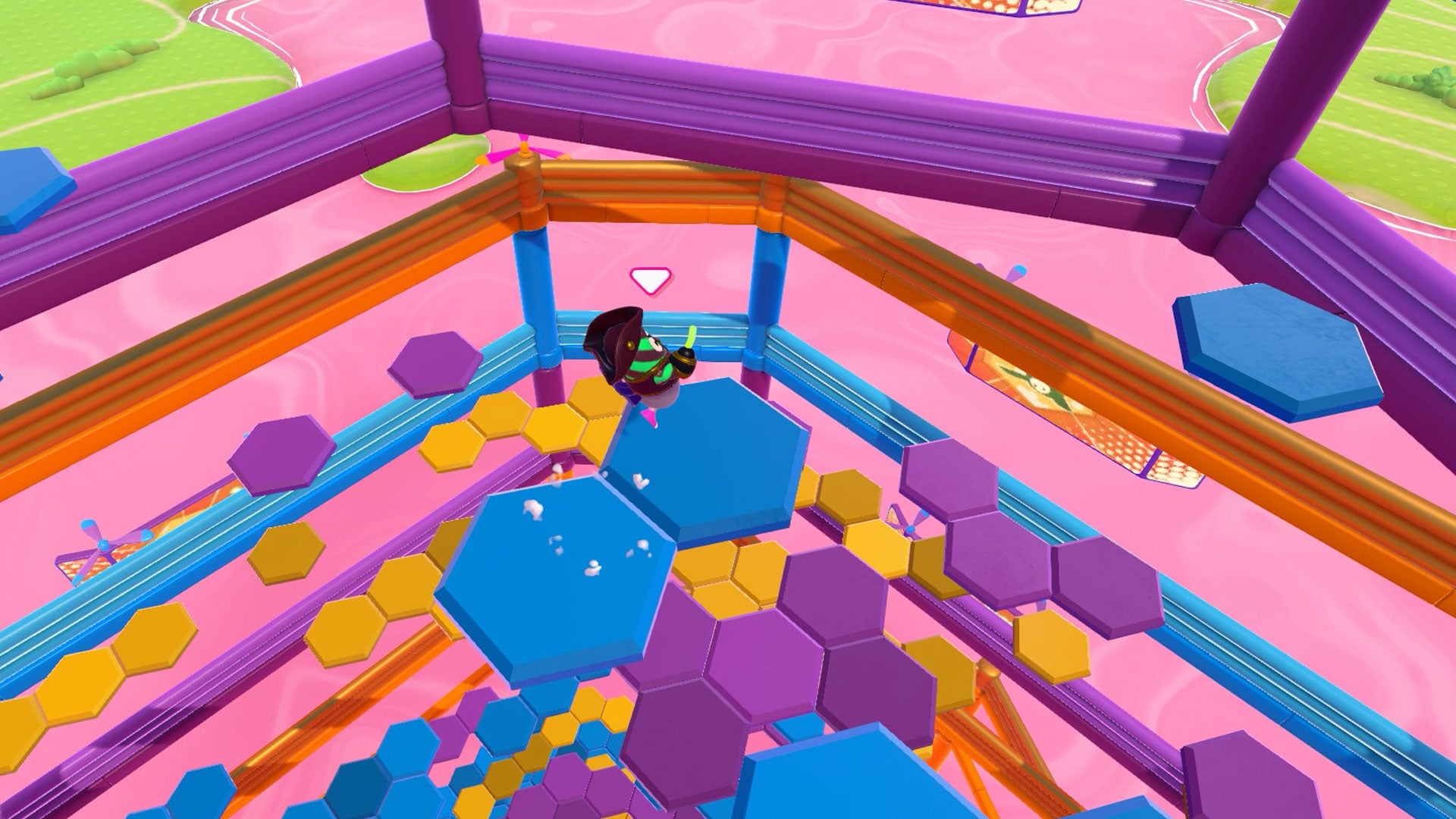 Hex-A-Gone is the ultimate final game. One that combines strategy, skill, and more than a little bit of luck, but that’s what makes it great. It’s a game where skilled and experienced players have the edge, but there’s always room for their plans to go awry, allowing lesser experienced players to still have a fighting chance. Beyond that though, the game is just fun. It’s strategic platforming action at its best, making it the best Fall Guy minigame, at least so far.

We also ran a faceoff to see which minigames the IGN audience thought were the best, with the top 10 represented in the poll below. Let us know which one you think is the absolute king of Fall Guys minigames!