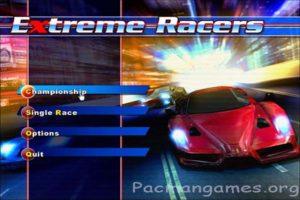 Extreme Racers is a 3D car racing game with common plot plot games like in other racing games. Players are given two choices of modes, namely Single Race or Championship. Single Race can be used for training because players will only race in one car. Suitable for beginners to get used to how to control the car before competing in Championship mode.
The graphics of the game are quite clear and we can change the size of the screen resolution according to the capacity of the computer used. There is also a choice of graphics quality, can be set to Normal or Best Quality for the best display.

Like other racing games, Extreme Racers has many tracks and types of cars. But when you first play, there is only one track and one type of car that can be played, the other is locked. To be able to open a new track and a new car, players must win 3 in each race in Championship mode.

– Use nitro burst as soon as possible after the beep sound is heard, so the speed is maximum.
– Try to avoid bumping into the road dividing wall.