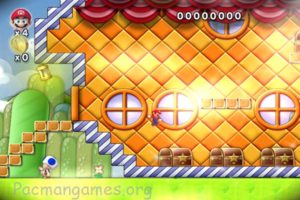 This is the latest continuation of Super Mario 3 : Mario Forever. This is completly new game! Enter to world of New Super Mario Forever 2012 fight on eight large maps filled with plenty of levels and secret stages. use many powerups like tanooki, bomberman, Boomer-Man, Wegetable Super Power, Power star, Power Clock, Fire flower and much more! The diversity of the levels is very impressive. Game has also renewed graphics and much better scrolling in comparison to the original Mario. You will have to get through levels ranging from underwater caverns to levels filled with hot lava. Of course, there are also many novelties in the gameplay – an option to save your game, brand new enemies and bonuses are only a few of them! However, fans of the original old Mario don’t have to fear – it is still the same game, only upgraded. Collecting coins, jumping into the pipes, hidden levels – there are still here! Don’t hesitate to download Mario Forever now – but remember, this video game. New Super Mario Forever 2012 if completly new creation! This is a sequel of the first version of Mario Forever! Start playing what are you waiting for.