Seven-time Classic Tetris World Champion Jonas Neubauer has died at the age of 39 from a “sudden medical emergency.”

The news was given by Neubauer’s Twitter account, with the message reading, “It’s with a heavy heart that we deliver the terrible news that Jonas has passed away from a sudden medical emergency. He was the absolute best. We are devastated, overwhelmed with grief, and we already miss him dearly. Information to follow when it becomes available.”

The official Tetris Twitter shared the news of Neubauer’s passing, saying, “This is a tremendous loss in so many ways. Jonas Neubauer was one of the greatest classic Tetris players of all time in skill, spirit, and kindness. Our hearts go out to his family and friends, and to the entire classic Tetris community, as we all mourn his passing.”

The Classic Tetris World Championship Twitter also shared a heartfelt message to Neubauer, saying, “We are heartbroken to share that Jonas Neubauer, 7-time CTWC champion, passed away suddenly on Jan 4. We could have never asked for a greater champ, role model, and friend. Jonas, we miss you, we love you, and we thank you for inspiring us to always be our best. Rest in peace.” 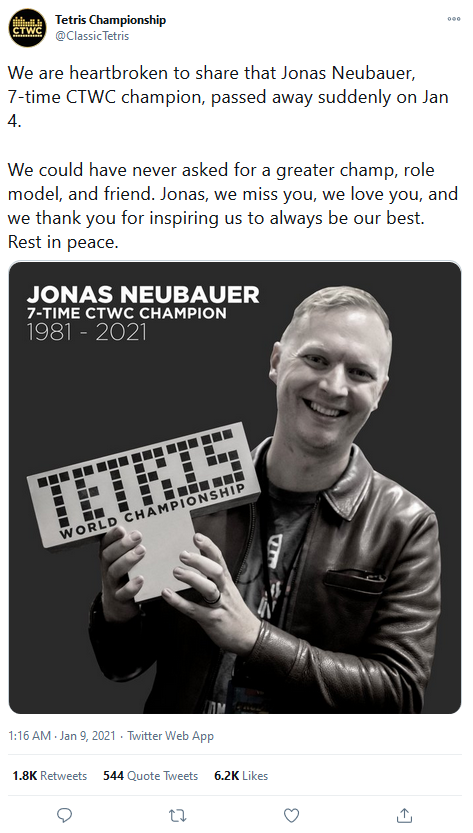 A GoFundMe has been created for Neubauer and reveals more of his life, including a funny story of how a misprint described him as a 60-year-old from Albacete, Spain.

“Jonas played along, tweeting his love for his newfound homeland,” The GoFundMe reads. “Soon, residents of the Spanish city started following him, cheering on their newest citizen. Eventually beloved citywide, the Mayor invited he and Heather to visit, bestowing Jonas with the Knife to the City (their incredible version of our “key to the city”).”

Neubauer is survived by his wife Heather Ito, his mom Sharry Neubauer, his brothers Jason and Justin, and his six nephews.

Have a tip for us? Want to discuss a possible story? Please send an email to [email protected].

Adam Bankhurst is a news writer for IGN. You can follow him on Twitter @AdamBankhurst and on Twitch.